When we think of pirates, we think of the prolifically criminal men, both fictional and in the real world, that have captured our imaginations for ages. But what of the lesser-discussed female pirates, perhaps even more fearsome than their male counterparts? These ladies were far cries from swashbuckling sweethearts, and arguably the most terrifying and notable of them all is Ching Shih, the terror of the Chinese seas.

Very little is known about Ching Shih's early life. In fact, Ching Shih isn't even her real name. It means "The Widow of Ching," which was one name for her first husband. But even a name that implies she was nothing but the property of a man never held Ching Shih back. The young Ching Shih, who was rumored to be a great beauty, worked as a prostitute in a floating brothel in the 18th century in Canton, China. The circumstances of her betrothal to her first husband, Zheng Yi, are debated, but it is certain that, by force or consent, she became the wife of this already powerful pirate captain in 1801 at the age of 16. However, always the savvy businesswoman, Ching Shih negotiated a deal in her marriage: She would have true equality in everything that was her husband's, including his "business dealings" (i.e., stolen booty). This means she took 50% of all proceeds, power, and decision making. At a time when it wasn't weird for a young teenager to be a seasoned brothel employee, this was rather unusual, to say the least.

At the time of their union, Zheng Yi manned what was known as "The Red Fleet," an armada of pirate ships that sailed under a red flag. With Ching Shih’s assistance, the couple amassed an even more formidable coalition of ships with the Red Fleet in the lead. The lesser ships consisted of fleets named for other colors: Black, White, Blue, Yellow, and Green. In total, they commanded 1,200 ships and anywhere from 50,000 to 70,000 crew members. Try to imagine 1,000 ships. Even our modern brains aren't capable of it. It's not hard to see why the Zhangs ruled the seas of China pretty much unopposed. In April of 1804, the Zhengs pulled a power move: They organized a blockade of the Portuguese trading port in Macau. Portugal promptly moved to defend themselves, but they were easily defeated. Britain, as usual, decided to stick their noses in, but even this great political force did not dare trifle with the pirates; they instead offered escorted passage to all allied ships in the area.

But then tragedy struck: With only six years of union behind them, Zheng Yi died in Vietnam in the midst of a hurricane. Rather than accept her status as a widow, however, Ching Shih quickly amassed alliances and troops, solidifying her power and prestige. She could have lived a cushy life as a widow, but she wasn't about to give up the power that came with her late husband's position.

First, she made sure she had the allegiance of the most powerful man around: Chang Pao, her late husband's second in command. Chang Pao had a somewhat complicated relationship with Zheng Yi: He was his adopted son but also his lover. He had once been an uneducated farm boy captured by the pirate fleet who made his way up in the ranks, which meant he was fairly easy to manipulate. He readily surrendered all control to Ching Shih and pledged his loyalty as well as his bedchambers. The rest of the men soon fell in line.

As unprecedented as a female pirate captain was at the time, what was even more unusual was the way that Ching Shih conducted her "business." She implemented a strict code of conduct within her fleet that carried severe punishments for rule-breakers, which resulted in an obedient and well-oiled crew despite its staggering numbers. Some of these more notable rules were:

Through these rules and many others, plus pure cunning, intelligence, and sheer willpower, Ching Shih rapidly became wildly powerful. She even moved inland through rivers in small boats, conquering many villages on smaller trade routes who had to pay her taxes or die.

Eventually, the Emperor of China got a bit nervous about the rise of Ching Shih's rule. She essentially had the majority of his empire under her thumb, which is a pretty bad look for an emperor, so he sent a fleet of ships to challenge the pirate queen---and failed miserably. Not only did Ching Shih easily defeat the Emperor's armada, she also managed to capture over 60 ships and their crew, convincing the men to come to her side by offering them the choice between subservience or being nailed to the deck. You can probably guess what most of them chose.

This only made the Emperor more incensed, so he rallied (translation: bribed) the assistance of Britain and Portugal, but once again, Ching Shih easily defeated the oncoming forces, effortlessly staving off the attacks to her livelihood for over two years. Finally, the Emperor admitted defeat and offered Ching Shih an unprecedented deal: amnesty if she would kneel to him and disband the Red Fleet. Ever the negotiator, the pirate queen accepted amnesty (and her retirement as a free woman), but she only agreed to kneel to the Emperor if it was in marriage to her right-hand man, Chang Pao.

Thus, Ching Shih was granted her freedom while retaining all of her wealth and gaining a husband. She died at the formidable age of 69 after a quiet second career running a gambling establishment. We should all be so lucky. 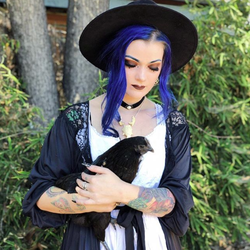