The History Of Subjective Diction In Sex Ed Textbooks

When considering the discrepancies in what is expected of men versus women in modern-day society, we often consider how the role of women in families have changed over time, how the women's suffrage movement improved the status of women, and how women today expect others to perceive them. Rarely are we critical of how textbooks are written, or biases in the dissemination of historical, or even biological, educational material.

Immediately following his election as the leader of the free world, backlash against President Donald Trump and his comments about women during the 2016 presidential election emerged in the form of protests. In a worldwide display of solidarity on January 21, 2017, the Women’s March on Washington became the largest single-day demonstration recorded in United States History, with over 5 million people protesting across all seven continents. Given that the historical precedent for it goes as far back as the earliest societies, what can be done to curtail the spread of male and female stereotypes responsible for perpetuating misogyny? The answer, according to Emily Martin, lies within our textbooks.

The Difference Between How Eggs and Sperm Are Depicted In Textbooks In “The Egg and the Sperm: How Science Has Constructed a Romance Based on Stereotypical MaleFemale Roles,” Martin describes how the relationship between egg and sperm leading up to fertilization are often described by scientists within the confines of stereotypical gender roles, and are ultimately published in textbooks and scientific journals. She begins her argument by first comparing how male and female reproductive physiology are described among scientists, and then comparing descriptions of the reproductive process itself between the genders.

“By extolling the female cycle as a productive enterprise, menstruation must necessarily be viewed as a failure. Medical texts describe menstruation as the “debris” of the uterine lining, the result of necrosis, or death of tissue. The descriptions imply that a system has gone awry, making products of no use, not to specification, unsalable, wasted, scrap.” -Martin, 1991

Martin asserts that the “enthusiasm” with which the female reproductive physiology is described ends after its depiction as a monthly cycle which produces and protects eggs with the intention of creating babies. Menstruation, she states, is depicted across medical texts as a “chaotic disintegration of form,” often marked with adjectives such as “ceasing” and “dying.” Meanwhile, the male reproductive physiology is described with marvel, as being “produced,” “valuable,” and the opposite of the female’s “overstocked inventory” threatened by a biological clock.

“Whereas the female sheds only a single gamete each month, the seminiferous tubules produce hundreds of millions of sperm each day.” The female author of another text marvels at the length of the microscopic seminiferous tubules, which, if uncoiled and placed end to end, “would span almost one-third of a mile!” She writes, “In an adult male these structures produce millions of sperm cells each day.” Later she asks, “How is this feat accomplished?” None of these texts expresses such intense enthusiasm for any female processes. It is surely no accident that the “remarkable” process of making sperm involves precisely what, in the medical view, menstruation does not: production of something deemed valuable.” -Martin, 1991

Why isn't the excess of sperm production seen as wasteful? It is within this comparison that gender roles become the most obvious, according to Martin. A woman’s ovulation cycle is traditionally purported as delicate, limited by time, and consisting of a set amount for life. Conversely, men are considered “producers” which produce millions of sperm daily. These gender roles mirror the ones we see in society today: women are generally, according to Martin, deemed too fragile to hold certain occupations, and when they do, are valued less, earning 81% of men’s average hourly wages. Meanwhile, men are seen as the backbone of their families, and are expected to “produce” and provide for their fragile women and offspring.

Martin continues her comparison of gender stereotypes in scientific outlets, retorting that while one scientist remarks that it is a mystery why many eggs are formed that end up dying in ovaries, “the real mystery is why the male’s vast production of sperm is not seen as wasteful.” She goes on to remark that like the reproductive physiology, the biological system leading to conception is also described using male and female stereotypes:

“It is remarkable how "femininely" the egg behaves and how "masculinely" the sperm. The egg is seen as large and passive." It does not move or journey, but passively “is transported,” “is swept,”’ or even “drifts” along the fallopian tube. In utter contrast, sperm are small, “streamlined,” and invariably active. They “deliver” their genes to the egg, “activate the developmental program of the egg,” and have a “velocity” that is often remarked upon. Their tails are “strong” and efficiently powered. Together with the forces of ejaculation, they can “propel the semen into the deepest recesses of the vagina.” For this they need “energy,” “fuel,” so that with a “whiplash-like motion and strong lurches” they can “burrow through the egg coat” and “penetrate” it.” -Martin, 1991

Re-writing history from an objective perspective Seen as “passive,” the egg is described as something that is acted upon and lacks personal autonomy. Martin details how sperm is depicted within a patriarchal sense by exercising power over a “passive” egg to “streamline” and “activate” the egg’s development. This depiction reflects" Mirkin’s Theory of Patriarchy," in which males are seen as having control over institutional power, and exercise such power in a way that prioritizes their needs at the expense of an oppressed class of women, according to Martin.

Suggestion of female lack of personal autonomy is further depicted as Martin likens the egg’s role in reproduction to that of Sleeping Beauty:

“a dormant bride awaiting her mate’s magic kiss, which instills the spirit that brings her to life.” -Martin, 1991

There is an overwhelming amount of evidence to support Martin’s claim of the existence of gender role stereotypes in scientific texts related to reproduction and related physiology. Gender role stereotypes have somehow transcended political discourse and civil rights movements, despite efforts to the contrary, and landed within the textbooks we use to educate future generations, which is important to consider given that such texts should remain objective to preserve the integrity of facts and history.

As always, we must turn our attention to the language used in textbooks and exercise caution over using gender tropes to describe scientific processes. According to Martin, teaching students about "princess" eggs and "courageous" sperm will only serve to widen the divide between men and women and continue to restrict the upward mobility of women in today's society and cast a shadow of over normal, female biological functions. 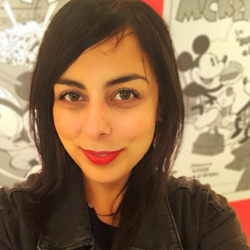 Janine Gharghoury has a background in health care policy, analysis, and government institutions. She writes about health-related trends and provides insight on medical standards, when she's not helping get laws passed to improve health care in the state of California. On the side, she enjoys songwriting, trying new cheeses, and hanging out with her dog Neptune.