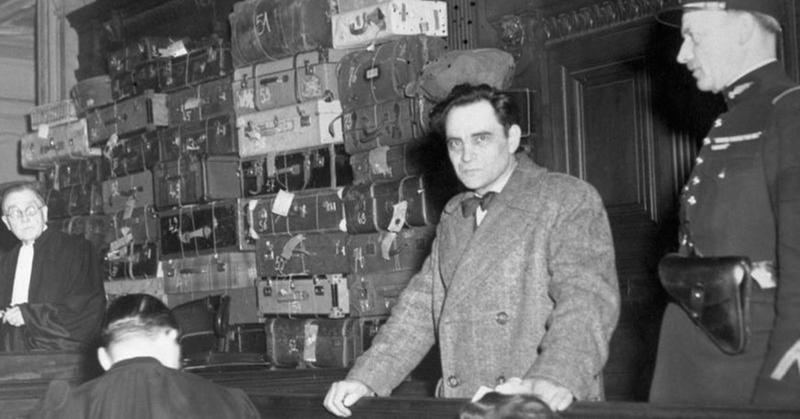 Robert Hansen- The Serial Killer Who Hunted His Victims For Sport

Between 1971 and 1983, Alaskan baker Robert Hansen killed at least 17 women. Although he was only convicted of four murders, each were carried out the same way, with the same brutal precision. Hansen's story isn't of someone who went down the wrong path; it's the story of the real-life boogeyman.

Robert Hansen was born in Estherville, Iowa in 1939 to a family of Danish immigrants. His father, a baker, expected him to go into the family business, but the only thing the young Hansen liked to do was hunt and practice archery. There's no account of Hansen having friends or any semblance of a social life. Hansen later said that he was rejected by the young women in his high school and mocked for his stutter, pushing him to fantasies of revenge. The Calm Before The Storm

Starting in 1957, it looked as if the Army Reserves could offer Hansen an escape, but he was discharged after just a year. After he returned to Iowa, he worked as an assistant drill instructor with the Pocahontas, Iowa police and even married a woman that he met on the job. From the outside, it looked as if he was finding his footing as an adult and letting go of his anger from the past, but this was the calm before the storm.

On December 7, 1960, police picked up Hansen after he burned down the Pocahontas County school bus garage, an act he blamed on the mental anguish he endured in high school. He only served 20 months of a three-year sentence, and by the time he was released, he was divorced. Looking for a change, he fled to Alaska.

In 1967, moving to Alaska meant starting over from scratch. No one knew about any part of his past, and Anchorage was a small community at the time, so Hansen easily blended in with his neighbors. He remarried, started a family, and opened a bakery, just like his father always wanted.

Five years after he moved to Alaska, however, Hansen was arrested first for the abduction and attempted rape of one woman and then the sexual assault of another. Altogether, Hansen served six months in prison before he was remanded to a halfway house. Emboldened by his ability to walk free after two heinous crimes, he started his killing spree in 1973. Every killer has a modus operandi. Jeffrey Dahmer picked up men in clubs before taking them back to his apartment and killing them. Ted Bundy wore a cast and preyed on brunettes who were kind enough to offer him help. Robert Hansen kidnapped sex workers, flew them to a remote section of the Alaskan wilderness, and hunted them.

Hansen is far from the only monster to target sex workers, and there's a reason for that: Police are less likely to investigate their deaths as thoroughly as they otherwise might. In Hansen's case, they were also readily available. Construction on the Trans-Alaska Pipeline turned many cities into boom towns in the '70s, and sex workers followed the money. When they went missing, it was generally assumed that they left for greener pastures, not that they were being hunted in the wilderness. Hansen's first murder didn't go well. Following his arrest in 1983, he told authorities that in the early '70s, he picked up a sex worker, and as he was driving her out of town, he pulled a gun on her. He didn't expect her to fight back. Hansen and his victim tussled in the car, but after he stabbed her in the neck with a knife, things came to a quick end. No one knows if she succumbed to her injuries in Hansen's car, but he didn't have time to fly her to the woods. Instead, he dumped her in a shallow grave, where she stayed until 1980. Hansen didn't know her name, and by the time she was discovered, no distinguishing features could be detected.

After the near disaster of his first kill, Hansen learned to be more cautious, although his method changed little. It's not as if Hansen was operating in complete secrecy at this time. In 1976, he was arrested for shoplifting a chainsaw from Fred Meyer, but after appealing the sentence, he was released. Later, he was arrested for assault. Following his final arrest, a judge told the Associated Press, "This gentleman here has been known to us for several years. We've turned him loose several times." The One Who Got Away

Soon enough, the bodies of young women started to turn up along the Knik River and Figure Eight Lake. The authorities were certain that they had a serial killer on their hands, but they didn't have any leads until they were approached by Cindy Paulson, a teenage sex worker who Hansen kidnapped and sexually assaulted in his home. He kept her locked in his basement for an entire day before he drove her to an airfield, where he planned to go about his business as usual, but Paulson managed to escape. Handcuffed and barefoot, she burst out of Hansen's car and ran to the closest road, where she flagged down a trucker and asked him to take her to a police station.

Spending all of that time in Hansen's home meant Paulson had plenty of information to give to the police. She told them his address, the model of his car and plane, and what he looked like. When they questioned Hansen, he gave them what appeared to be a solid alibi, but they found out the truth when they spoke to the friends Hansen claimed he was with during the time of the kidnapping and assault.

A search of Hansen's home revealed a variety of secret compartments and hidden rooms, including a soundproof room in his basement that held a map of Anchorage marked with 20-plus locations, likely where he buried his victims. In the attic, police found an extensive jewelry collection (trophies that he kept from his victims) as well as a .223 caliber rifle. After he was caught, Hansen confessed to murdering 17 women and sexually assaulting an additional 30 women in the '70s and early '80s. He agreed to show federal investigators where he buried his victims in exchange for only being charged with four of the 17 murders, and after a quick trial, he was sentenced to life in prison plus 461 years. Only 12 women were found with Hansen's help; any knowledge of the locations of the final five died with him in 2014.